Perhaps AI can provide new and ~unique~ ideas for food content on the internet. 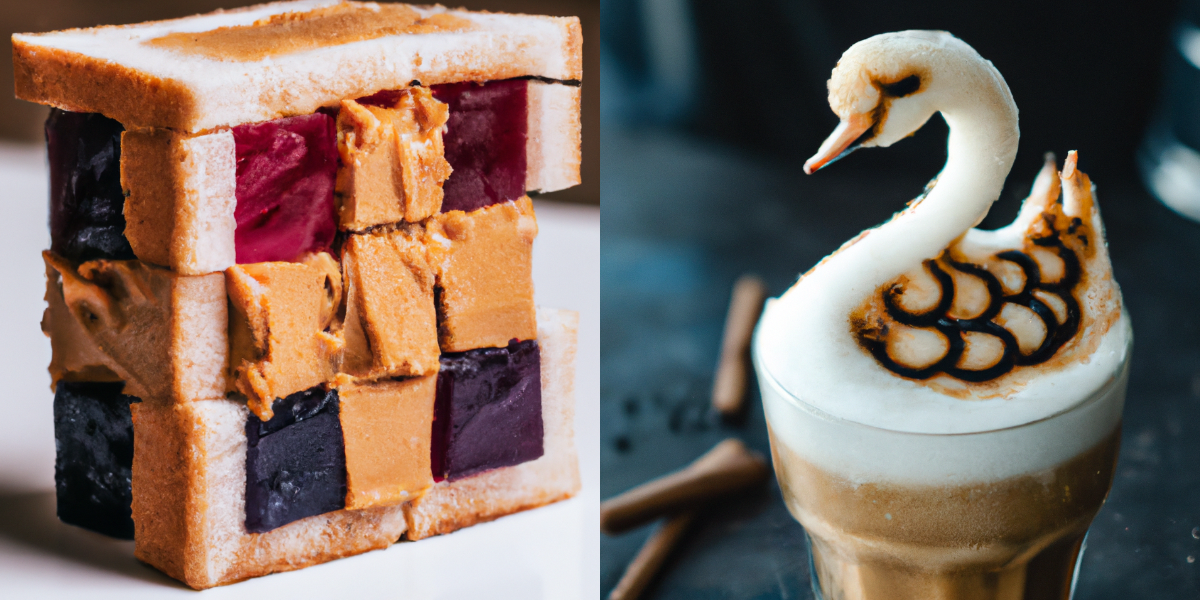 Good-looking food has been a part of internet culture ever since the beginning. Top Instagram, YouTube, and TikTok foodie accounts have millions of followers, and recipe blogs are some of the most highly trafficked content on the entire internet.

But now that large AI-image generation models such as DALL-E 2 by OpenAI have been made available, perhaps AI can provide new and unique ideas for food content on the internet.

For example, let’s say you ask DALL-E 2 to generate a colorful alcoholic cocktail:

All the generated images are coherent and do indeed depict a cocktail, although the compositions are inconsistent which may not be what we would want to share on social media.

The best way to improve the image quality of AI-generated images is to use prompt engineering, as these models don’t create “good” images by default, just statistically average images based on its training data. For example, adding “trending on artstation” to any prompt for any image tends to make it look a lot more artsy, and the “trending” is a correlative signal with good artwork.

In the case of realistic food, I found that professional food photography does the trick for food-esque prompts. Adding that to the cocktail prompt above:

Indeed, in each image it’s a cocktail, but with bonuses such as increased detail, aesthetic garnishes both on the dish and table, and a depth-of-field blur effect to create a central focus on the dish itself. You could share any of those cocktail photos on social media and no one would be the wiser (although you should always disclose if images are AI generated!)

This is the first time I’ve seen AI image generation models generate food well without hitting the uncanny valley, and one of the few prompt “ingredients” (pun intended) where the resulting images have a consistent composition. It’s not a surprise, especially since, as noted, high-quality food content would be extremely prolific in DALL-E 2’s training data.

What other fantastic foods can DALL-E 2 generate?

The original DALL-E, announced in 2021 but not publically accessible, went viral primairly due to the incredible creative results from demo prompts such as an armchair in the shape of an avocado:

Although adding “professional food photography” alone works to generate realistic food dishes, you can combine it with a prompt for other shapes, even abstract and absurd shapes that shouldn’t be logically possible for certain foods.

Let’s start with a basic shape, such as a heart. If you Google “X heart” for any food you will almost always get results (Instagram loves heart-shaped food). What about asking for a heart shape for a dish that by construction can’t be in the shape of a heart, such as a taco?

DALL-E 2 is still able to work around it, even by creating a new type of taco shell and employing optical illusions. And occasionally it cheats, as in the case with the top-right image.

Emoji are also valid options as shapes, which unlike hearts is far less common in Google Images. Let’s take a Cobb salad, which has specific ingredients. Can DALL-E arrange them into a specific emoji?

The answer is yes.

But we can get more absurd. For example, consider a Rubik’s cube. Can DALL-E coerce obviously noncubic foods such as a peanut butter sandwich into one?

The answer is a resounding yes.

Latte art, or drawing images in the milk foam of a latte, is a popular subset of food photography. But what about 3D latte art that goes outside the beverage?

What about going beyond the constraints of mere mortal perception of space and time? Can we assign food non-Euclidean properties?

Screw it, we can go further beyond, let’s just make some five-dimensional food.

As a puny three-dimensional being, I’ll just take DALL-E’s word for it.

Those who were terminally online during the early days of the internet may remember when a grilled cheese depicting the Virgin Mary sold for the then-ridiculous sum of $28,000. But with AI, we can do a lot more with foods that can look like people and public figures (within the constraints of OpenAI’s content policy).

Never mind, this avenue of food content is disturbing. Creative, but disturbing.

A Different Kind of Fusion Cuisine

I demonstrated earlier that the a X in the shape of a Y prompt addition can be used the change the shape of food dishes. But what if Y is another dish? Let’s try a Cobb salad and a hamburger:

Yes, it fuses them together! Although I am very afraid to ask what the ingredients actually are.

With that, it is now time to commit cruel culinary crimes!

The possibilities are endless!

The Future of AI Food Generation

DALL-E 2 is still limited access (and can be expensive), so let’s compare with DALL-E mini/Craiyon, which provides AI image generation in a free and easy manner. Also released recently, This Food Does Not Exist allows for the generation of certain types of food like cookies and sushi at high resolutions, albeit with no customization. For fairness, let’s look directly to DALL-E mega (via min-dalle), which is a newer and larger version of the mini model that has better image quality.

However, DALL-E mega definitely can’t compete with DALL-E 2 for this use case:

There’s obviously a lot more that can be done here in terms of prompt optimization and customization, and I hope that it’s given more ideas for both AI image generation users and foodies who want to make something unique. The DALL-E 2 Discord has used similar prompts such as a Minion dish with a prompt keyword being Michelin to further increase food quality (in my testing it did not work well for the prompts in this post as it makes the portions too small, unsurprisingly). Even when DALL-E 2 becomes more accessible or another newer model that makes better pics is released, AI-generated food pics won’t make chefs or social media foodies obsolete.

In the meantime, I’ve decided to experiment by making a new social media account devoted to sharing esoteric AI-generated food: Weird AI Chef! Please follow @weirdaichef on Twitter and @weirdaichef on Instagram, as they have many more absurd AI image generations not used in this post, with more to come!

Note: None of the DALL-E 2 generations used in this blog post were cherry picked: the “professional food prompt” is indeed that consistent, and the fail states aren’t too terrible either.

If you liked this post, I have set up a Patreon to fund my machine learning/deep learning/software/hardware needs for my future crazy yet cool projects, and any monetary contributions to the Patreon are appreciated and will be put to good creative use.
AI Image Generation