StyleCLIP is essentially Photoshop driven by text, with all the good, bad, and chaos that entails. 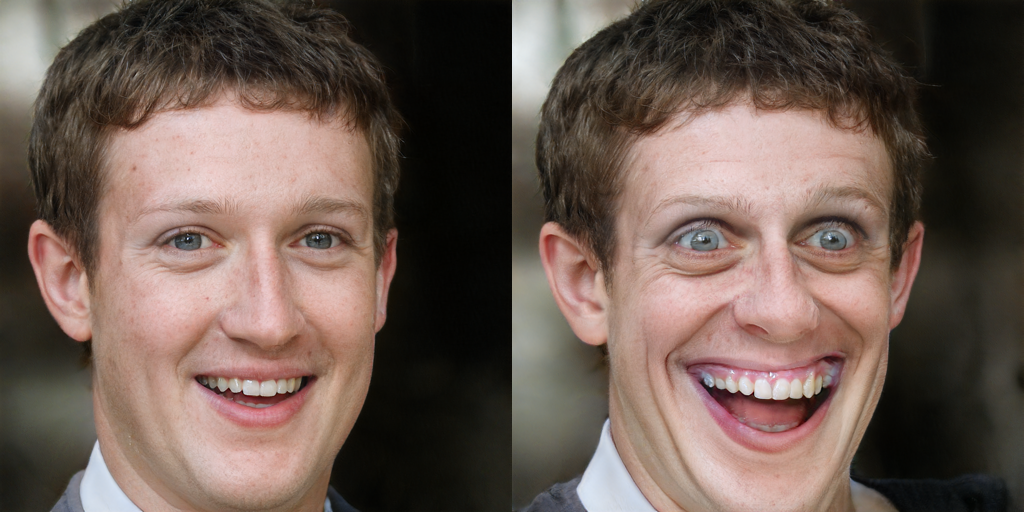 In 2021, OpenAI open-sourced CLIP, a model which can give textual classification predictions for a provided image. Since CLIP effectively interfaces between text data and image data, you can theoetically map that text data to StyleGAN. Enter StyleCLIP: Text-Driven Manipulation of StyleGAN Imagery, a paper by Patashnik, Wu et al (with code open-sourced on GitHub) which allows CLIP vectors to be used to guide StyleGAN generations through user-provided text.

The authors have also provided easy-to-use Colab Notebooks to help set up these models and run them on a GPU for free. The most interesting one is the Global Directions notebook, which allows the end user to do what is listed in the image above, and I’ve made my own variant which streamlines the workflow a bit.

After a large amount of experimention, I’ve found that StyleCLIP is essentially Photoshop driven by text, with all the good, bad, and chaos that entails.

Getting an Image Into StyleCLIP

GANs in general work by interpreting random “noise” as data and generate an image from that noise. This noise is typically known as a latent vector. The paper Designing an Encoder for StyleGAN Image Manipulation by Tov et al (with code open-sourced on GitHub plus a Colab Notebook too) uses an encoder to invert a given image into to the latent vectors which StyleGAN can use to reconstruct the image. These vectors can then be tweaked to get a specified target image from StyleGAN. However, the inversion will only work if you invert a human-like portrait, otherwise you’ll get garbage. And even then it may not be a perfect 1:1 map.

I created a streamlined notebook to isolate out the creation of the latent vectors for better interoprability with StyleCLIP.

To demo StyleCLIP, I decided to use Facebook CEO Mark Zuckerberg, who’s essentially a meme in himself. I found a photo of Mark Zuckerberg facing the camera, cropped it, ran it through the Notebook, and behold, we have our base Zuck for hacking!

All StyleCLIP generation examples here use the streamlined notebook and Mark Zuckerberg latents, with the captions indicating how to reproduce the image so you can hack them yourself!

Let’s start simple and reproduce the examples in the paper. A tanned Zuck should do the trick (in the event he forgets his sunscreen).

What about giving Zuck a cool new hairdo?

Like all AI, it can cheat if you give it an impossible task. What happens if you try to use StyleCLIP to increase the size of Zuck’s nostrils, which are barely visible at all in the base photo?

The AI transforms his entire facial structure just to get his nostrils exposed and make the AI happy.

CLIP has seen images of everything on the internet, including public figures. Even though the StyleCLIP paper doesn’t discuss it, why not try to transform people into other people?

Many AI practioners use Tesla Technoking Elon Musk as a test case for anything AI because of his contributions to AI and modern nerd culture, which is why I opted to use Zuck as a contrast.

Given that, I bring you, Elon Zuck.

What if you see Zuck as a literal Jesus Christ?

Due to being generated by StyleGAN, the transformations have to resemble something somewhat like a real-life human, but there’s nothing stopping CLIP from trying to gravitate toward faces that aren’t human. What if you tell StyleCLIP to transform Zuck into an anime character, such as Dragon Ball Z’s Goku?

Zuck gets the hair, at least.

People accuse Zuck of being a robot. What if we make him more of a robot (as guided by a robot)?

These are all pretty tame so far. StyleCLIP surprisingly has the ability to have more complex prompts while still maintaining expected results.

Can Mark Zuckerberg do a troll face? yes, he can!

We can go deeper. What about altering other attributes at the same time?

Working with CLIP rewards good prompt engineering, an incresingly relevant AI skill with the rise of GPT-3. With more specific, complex prompts you can stretch the “human” constraint of StyleGAN. 👁👄👁

Experimentation is half the fun of StyleCLIP!

You may have seen that all the examples above had positive alphas, which control the strength of the transformation. So let’s talk about negative alphas. While positive alphas increase strength toward the target text vector, negative alphas increase strength away from the target text vector, resulting in the complete opposite of the prompt. This gives rise to what I call antiprompts: prompts where you intentionally want the opposite of what’s specified where asking a normal prompt doesn’t give you quite want you want.

Let’s see if Zuck can make a serious face.

More pouty than serious. But what if he does the opposite of a laughing face?

It doesn’t stop there. In the previous section we saw what happens when you give prompts of people and compound prompts. What, you may ask, does the AI think is the opposite of a person?

In the Goku example above, Zuck got larger, darker hair, more pale skin, and a chonky neck. What happens if you do the inverse?

His hair is smaller and blonde, his skin is more tan, and he barely has a neck at all.

What if you make Zuck the opposite of a robot? Does he become human?

A fun feature I added to the notebook is the ability to make videos, by generating frames from zero alpha to the target alpha and rendering them using ffmpeg. Through that, we can see these wonderful transformations occur at a disturbingly smooth 60fps!

Animations are cool to fully illustrate how the AI can cheat, such as with the flared nostrils example above.

Or you can opt for pure chaos and do one of the more complex transformations. 👁👄👁

TikTok will have a lot of fun with this!

Let’s address the elephant in the room: is it ethical to edit photos with AI like this?

My take is that StyleCLIP is no different than what Adobe Photoshop has done for decades. Unlike deepfakes, these by construction are constrained to human portraits and can’t be used in other contexts to mislead or cause deception. Turning Mark Zuckerberg into Elon Musk would not cause a worldwide panic. FaceApp, which does a similar tyle of image editing, was released years ago and still tops the App Store charts without causing democracy to implode. That said, I recommend only using StyleCLIP on public figures.

In my testing, there is definitely an issue of model bias, both within StyleGAN and within CLIP. A famous example of gender bias in AI is a propensity to assign gender to gender neutral terms, such as He is a soldier. She is a teacher. Let’s try both for Zuck.

It is surprisingly easy to get the model to perform racist/sexist/ageist transformations without much prodding. Inputting face with white skin -> face with black skin does what you think it would do. Making similar transformations based on race/sex/age do indeed work, and I am deliberately not demoing them. If you do experiment around these biases, I recommend careful consideration with posting the outputs.

The Future of AI Image Editing

StyleCLIP is a fun demo on the potential of AI-based image editing. Although not the most pragmatic way to edit portraits, it’s fun to see just how well (or how poorly) it can adapt to certain prompts.

Even though everything noted in this blog post is open-sourced, don’t think about trying to sell StyleCLIP as a product: StyleGAN2 (which in the end is responsible for generating the image) and its variants were released under non-commerical licenses. But it wouldn’t surprise me if someone uses the techniques noted in the papers to create their own, more efficient StyleCLIP with a bespoke efficient GAN to create an entire new industry.

If you liked this post, I have set up a Patreon to fund my machine learning/deep learning/software/hardware needs for my future crazy yet cool projects, and any monetary contributions to the Patreon are appreciated and will be put to good creative use.
Image GAN AI Mark Zuckerberg Elon Musk